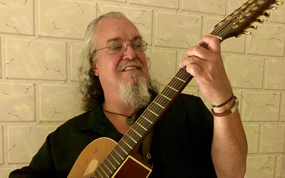 Born and raised in Miami Florida, Bill Cerny honed his skills as a Musician, Singer and Songwriter performing in venues all over South Florida and the South East. Bill's musical influences are broad, ranging from John Denver to The Allman Brothers, his compositions range from soft rock and folk to country with a healthy dose of southern rock. Along with his vocals, Bill is a highly skilled and established guitarist. His primary instrument is the 12-string acoustic guitar, yet he is also adept at playing electric guitars, slide, dobro, as well as fiddle, mandolin, banjo, and many other instruments. Bill is highly respected among his peers and envied by all who marvel at his mastery of the guitar. Whether performing on his 12 or 6-string guitar, it's not unusual to hear him playing base, rhythm, and lead simultaneously.