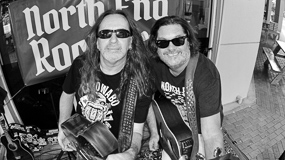 North End Rockers formed in 2019 in a British Pub in Pompano Beach. Tim Brown (Lead Guitar and Vocals) and Mitch Mazur (Rhythm Guitar, Vocals and Kazoo) were regulars at the pub and soon became friends. As they got to know each other they discovered that not only were they both musicians, but they both had a similar, wide-ranging taste in music and were not limited to one particular style or genre. They formed the band and began putting together their ever expanding song list that they call “a little smidge of everything.” They began playing in their favorite pub and soon after, other places in and around Pompano Beach. The Duo, who got their name by where they chose to sit at the pub (the North End of the bar) has become a staple on the local music scene. The self proclaimed “Hardest Working band in Pompano” can be found every weekend at various spots around town. Even though their favorite pub where they met has closed, they keep the spirit of the North End alive with their music.